Omicron can fuel inflation as Americans incline more to shopping 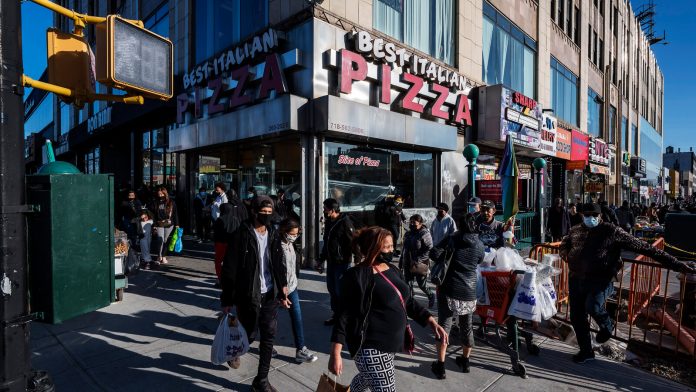 The National Retail Federation’s Chief Economist, Jack Kleinhenz, warns that the third wave of Corona holds the potential to create inflation as more and more Americans will keep shopping instead of spending more outside of the home.

The news recorded his view on the current economic scenario. He said that “little is certain about omicron’s impact on consumer demand, but people who stay at home because of the variant are more likely to spend their money on retail goods rather than services like dining out or in-person entertainment.”

Also, this can speed up inflation as supply chains are already overloaded by online shopping.

He adds that “each successive variant has slowed down the economy, but that the degree of the slowdown has been less.” Consumers are reluctant to spend more as they are now fully vaccinated and are hearing about milder cases.

As per the data collected by John Hopkins University, the U.S. recorded more than 1 million new infections on Monday. The country is currently reporting 553,000 new infections daily, which is twice the week before.

The spread of Omicron has led to the shutting down of retailers and restaurants across the country. Starbucks, Nike, Apple, and Gap-owned Athleta, have either shut stores or shortened the opening hours. Walmart has temporarily closed more than 60 stores in the coronavirus hotspot region.

The Federation predicts that holiday shopping will boost revenue generation in November and December by between 8.5% and 10.5%. It also has the potential to set a high sales record of between $843.4 billion and $859 billion.

The trade group will report the official holiday sales next week after the Census Bureau shares December retail sales data. Kleinhenz also stated that holiday sales could increase by up to 11.5 percent over last year.

Lastly, it is important to understand that Omicron is unlikely to disturb or slow down businesses.