The delivery time is a big issue for both the online buyers and the sellers. The demand and preference for speed have given birth to various technologies, services, and companies. Speeding up the delivery process through one-day delivery via mobile vehicles is not at all enough. Thus the retail giants and the eCommerce platforms are now working on adopting new and speedy methods that can unleash the horizon of easy customer services. Hence the drone delivery companies are a thing to talk about in the highly growing e-commerce market of 2021.

To integrate that speed in the services, companies are now shifting their interest to commercial delivery drones, which can offer them seamless delivery, expansion of their arena, and competitive growth in the market. The unmanned aerial vehicle or drones have the greater potential in delivering the packages to a location which is the new focus of the e-commerce giants.

What are the new steps that are getting included to leverage the drone implementation for commercial delivery?

Recently in 2020 U.S Federal Aviation Administration came up with the announcement of two safety rules for UAVs. These new rules are now anticipating the commercial drone industry in the US for package delivery and logistic purposes. These rules have addressed the security, safety, and privacy concerns with the innovative and advantageous utilization of drone delivery systems and technology.

Moreover, the pandemic has triggered the surge of growth in the eCommerce market, while the platforms need more smoothness in their services. Hence the overall scenario is acting as the catalyst in determining the shifting interest of the companies to the commercial drone deliveries.

What are the top Commercial Drone Delivery Companies?

Here is the list of drone delivery companies that are now growing in the air space for their package delivery through drones. Though the drone delivery facilities are still limited in number and form, still some companies are utilizing their services in this way. Hence it is worth checking out who is spearheading this advancement of parcel delivery. Have a look. 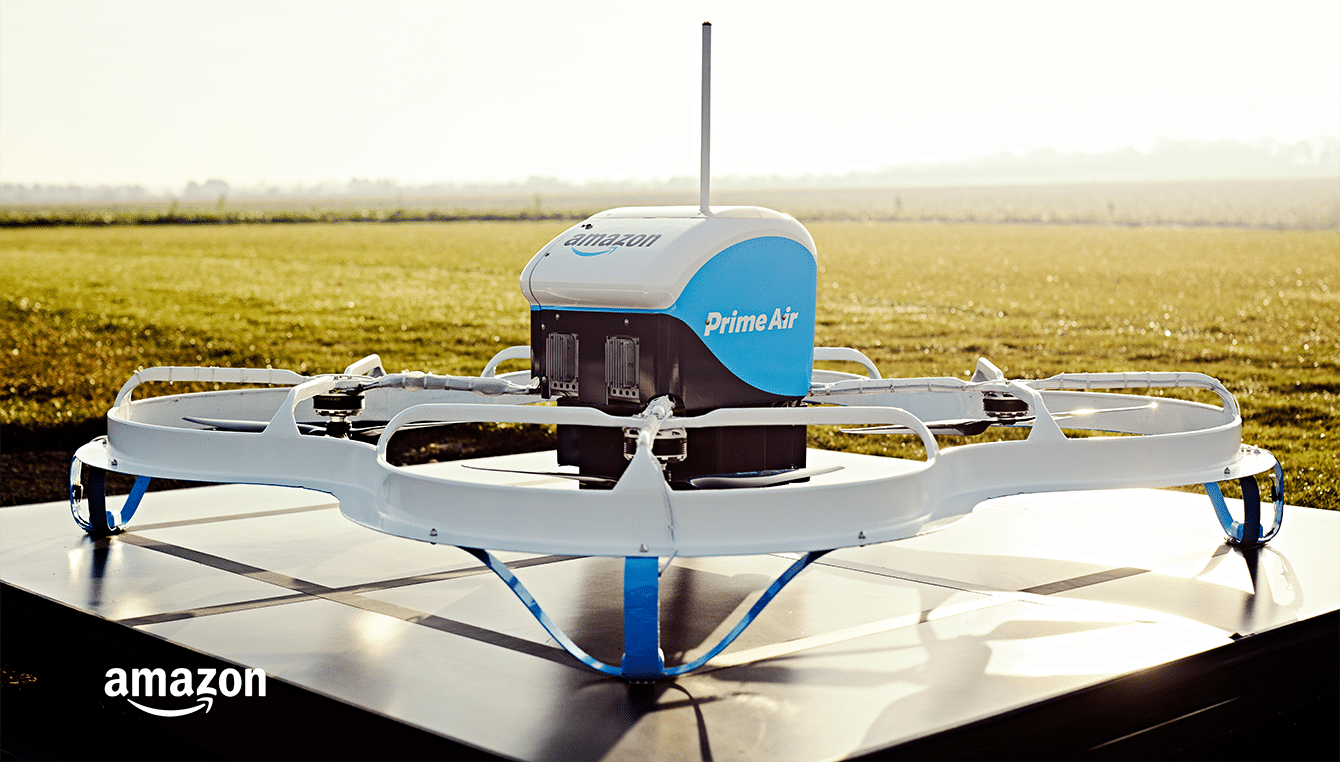 Well, it is evident to us that Amazon always has the hunger to do something new and innovative to amplify its delivery facilities. Whether it is their faster delivery through Prime membership or it is delivering the parcels through drone, this eCommerce giant is unstoppable.

Amazon prime air drone delivery will enable itself to deliver packages up to 5-30 pounds with small drones. Amazon is working on developing and testing its Prime Air facilities. The development and testing works are going on at its U.K, US. France, Austria, and Israel.

Amazon gained approval from the FAA to operate its Prime Air drone amazon in 2020. As Amazon thinks, it will enable them to deliver packages safely and effectively to their customers. At the re: MARS conference Amazon talked about its launch of the Prime Air drone facilities. The company also received a grant for its ground-based mobile drone fulfillment services in 2017.

When it comes to accessing the drone delivery facilities, Flytrex comes up with end-to-end delivery services. The company uses its automated drones for its eCommerce marketplaces, retailers, delivery companies, and restaurants.

The drones of Flytrex are capable of delivering packages worth 6.6 pounds. It delivers packages up to 6.2 miles.

This company started its deliveries by drone in Israel in 2013. As a supplier for the drone manufacturers that became one of the first drone operators in the eCommerce space. They use drones for delivering groceries and various goods in Iceland and Reykjavik. They are currently working on their test programs in North Carolina, North Dakota.  One of the big announcements that are surfacing about this company is, Walmart will be using Flytrex drones as part of their Pilot program in North Carolina.

The Wing is one of those drone delivery companies in commercial space that started quite earlier. This division of Alphabet surfaced their drone delivery services to the public in 2012. They work with a small drone and an OpenSky navigation system for their package delivery system. Their drone follows the design to deliver small packages that do not weigh more than 3.3 pounds.

Customers do not need to interact with their drone’s directory. The drone hovers20 feet above the ground and drops slowly to the ground, which is attached with a tether.

The Wing is the first company to receive its Air Carrier certification from the FAA. Until now, Wing has successfully conducted more than 100000 deliveries on three continents. Wing has also seen an optimal increase in its deliveries in recent years. Moreover, the pandemic has worked as a higher beneficial environment for this drone package delivery company as it continued its business while people kept staying at home. The Wing is now operating in Virginia, Helsinki, Canberra, and Logan City. 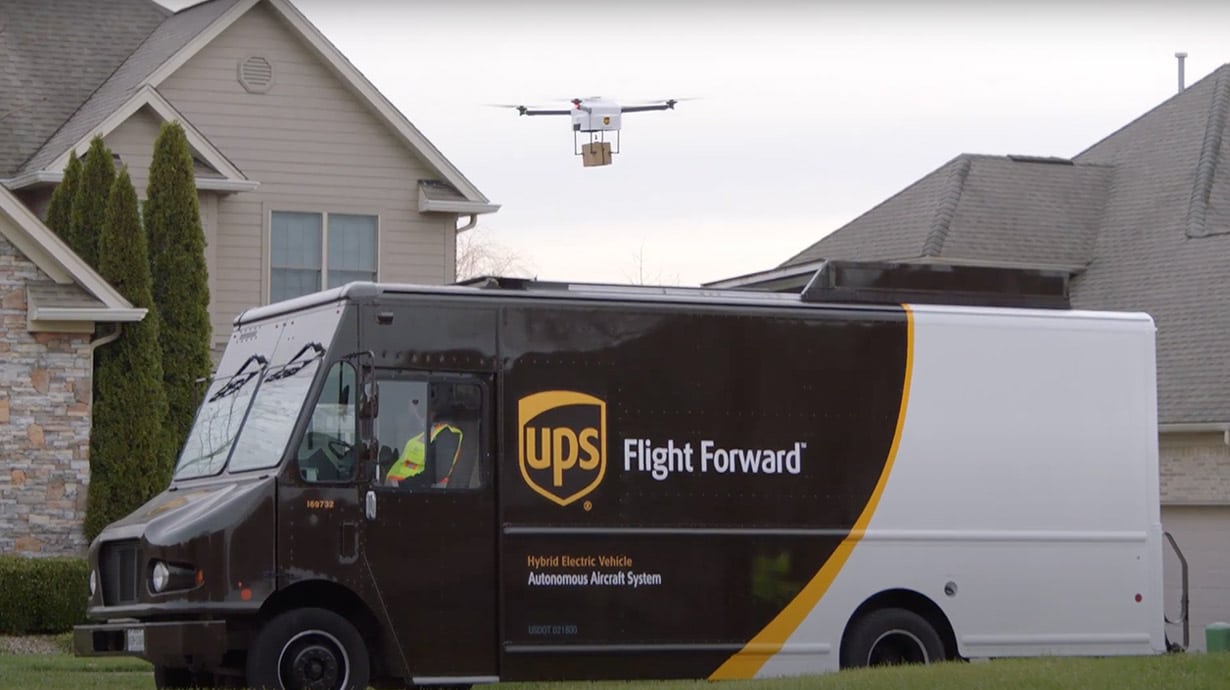 UPS Flight Forward is another main player in this field of drone delivery.  It is the first-ever company that got the full certification from the U.S government to operate its services through drone delivery systems.

In 2019, this company teamed up with Matternet, which is an autonomous platform for drone logistics.  Matternet works with the delivery of medical supplies to WakeMed hospital in North Carolina. Its drone delivers package across many areas. 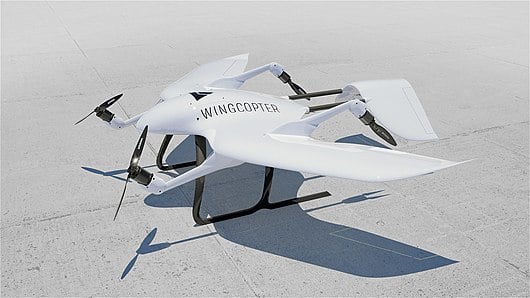 Wingcopter is a company based in Germany, who is working on the development of delivery options through postal services, eCommerce platforms, and retailers. They work on integrating their services through the supply chains.

Wingcopter started its journey as a manufacturer of drones. Now it is also offering its package drone delivery service facilities.

This company had already operated in the commercial space of a few international markets like the South Pacific Ocean, Vanuatu along with its partnership with Unicef. It has worked on vaccine commercial delivery drones in remote areas and Ireland. It has completed the world’s first delivery of insulin using drones while going beyond the visual line of its sights.

The company has also completed its Series A Funding round Worth$22 million, operated by Silicon Valley-based Xplorer Capital. This company is now preparing to make its entry in the U.S to achieve the operation s certification by FAA and for drone production. 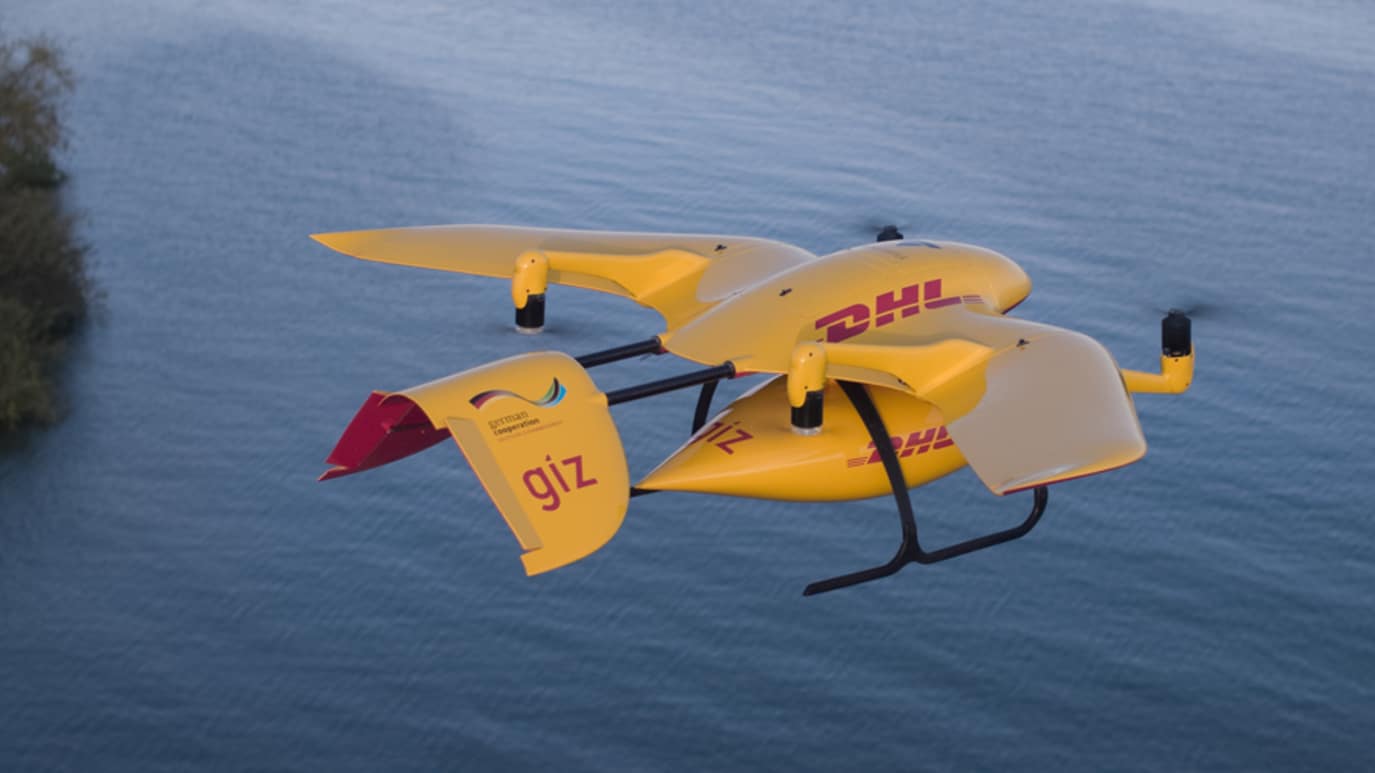 Another significant name in this field is DHS Parcelcopter which works as an autonomous drone delivery company. It can carry up to 4.4 pounds of payload and can travel at a speed of 43 miles per hour.

The company first started its journey in 2013 while transporting its small parcel from the east bank of the Rhine River to the corporate headquarters of DHL in WestBank.

In 2016, while working on its three-month trial, they invited the private customers of the Bavarian ski resort of Reit im Winkl and Winklmoosalm mountain for initiating its automated shipment and delivery services with drones to deliver packages.

It allowed them to complete 130 deliveries through drones within these locations. In 2018 the company’s Parcelcopter 4.0 was used as a service for rapid response to initiate the delivery of medicines in East Africa.  In its six-month delivery period, the company completed its 37 Km Flight from the mainland to an island within just 40 minutes. It has already flown over 1360 miles with roughly 2000 flight minutes. 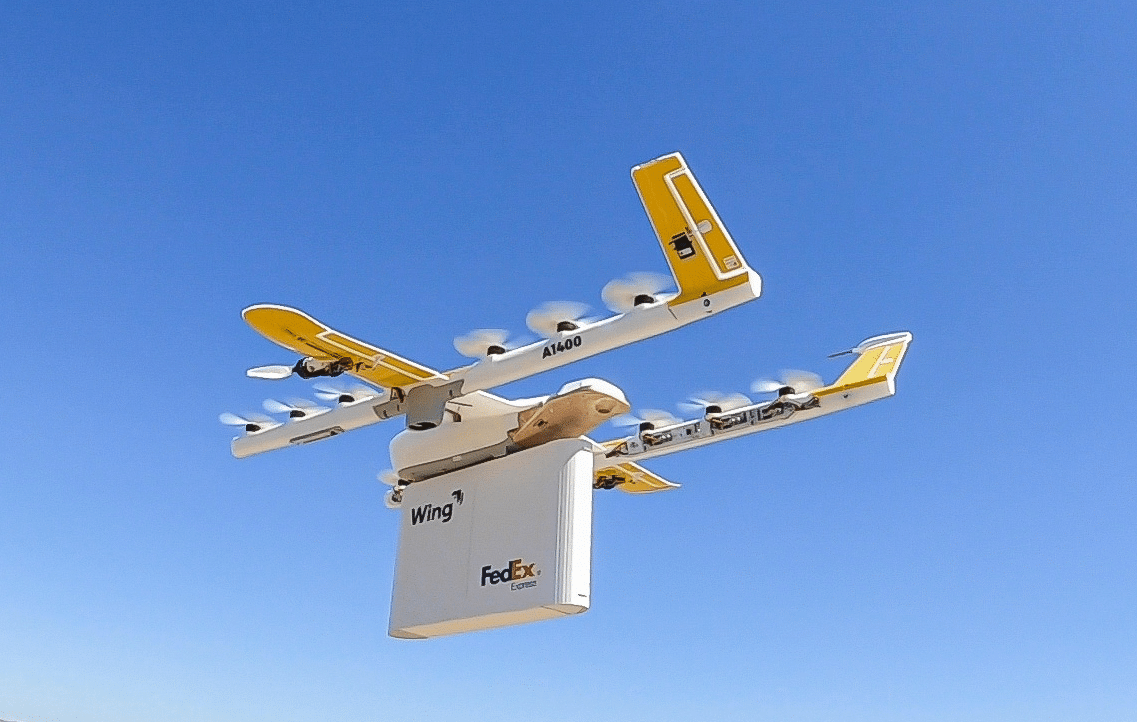 This drone shipping company has been quite less vocal about its interest in aerial vehicle technology for commercial delivery services until it finally emerged as one of the participants in this space.  Finally, the FedEx institute of technology at the University of Memphis disclosed its DRONES research efforts. Also, it unwrapped many plans for the UAVs related to its platform.

FedEx has registered its drones package delivery services with many investors related to UAV technology with the Trademark Office and US Patent. FedEx has also revealed in 2018 that its business would soon start deploying the UAVs at the Memphis International Airport. Drones would be able to replace airplane parts for professional maintenance on the ground and to evaluate their runway and aircraft conditions.

Flirtey, drones deliver packages company in the commercial space which is working on providing the last-mile delivery services with drones. The delivery drones of this company come in the form of a hexacopter which is made of carbon, aluminum, fiber, and 3D printed parts.

This company works with every small and autonomous, electrically powered aerial vehicle that covers the range of over 10 miles. The drones use a tether that lowers the cargo. The company’s drones use built-in safety measures that include an auto return to home, low battery return towards a safe location. Also, it includes proper safety in the event of any loss of GPS signal or communication.  The company first started its drone delivery services with the delivery of its first legal parcel in the USA. 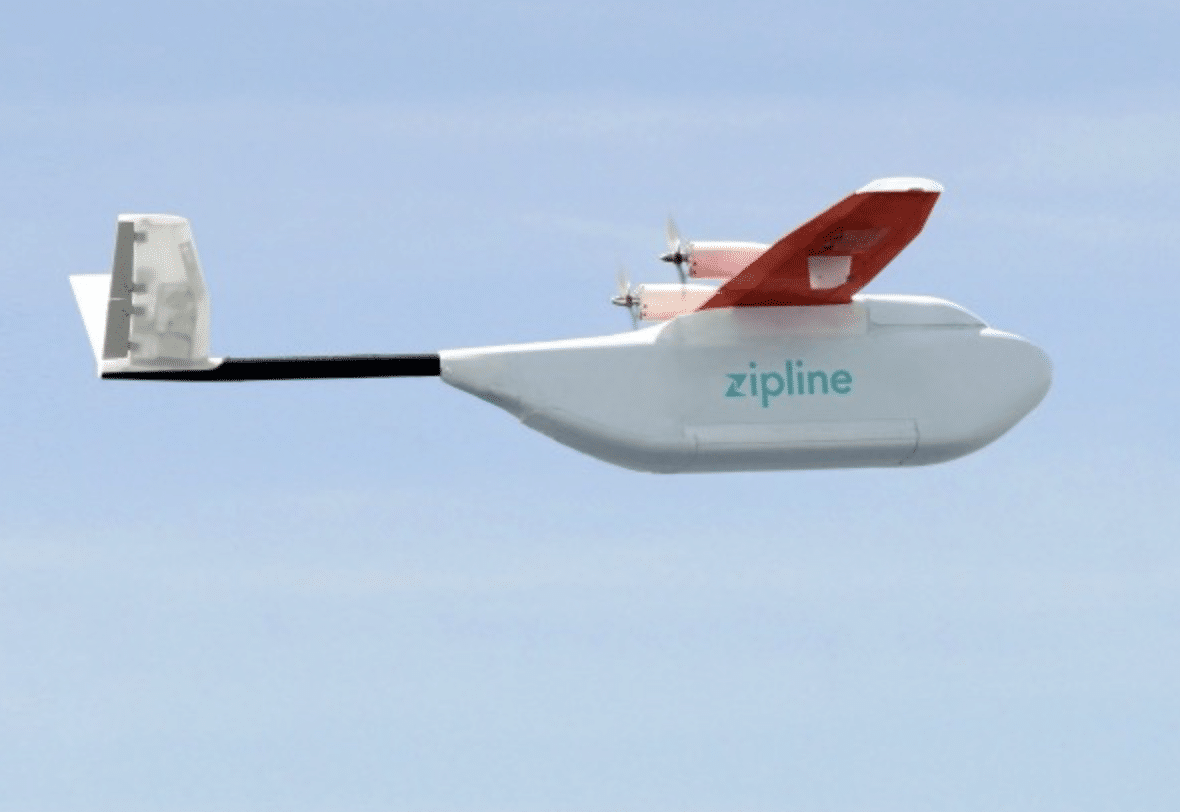 Zipline is another significant drone delivery company in this field that is quite an old player with their delivery services through drones. Zipline started its services in 2014. This company drones work to deliver life-saving products through its unmanned aerial vehicles.  Until now, Zip Line has successfully delivered 100000 commercial packages.

This San Francisco – based company, operates from the distribution at the centers which are placed at the center of its service regions. Zipline hires and trains local people to oversee the drone flights and the operation of fulfillment. Zipline works with the mission to offer everyone quick and convenient access to the vital supplies of medicines with its drones used for delivery. They believe that drones are capable of fulfilling such needs of delivery and can bring about some great transformation in the form of logistics. 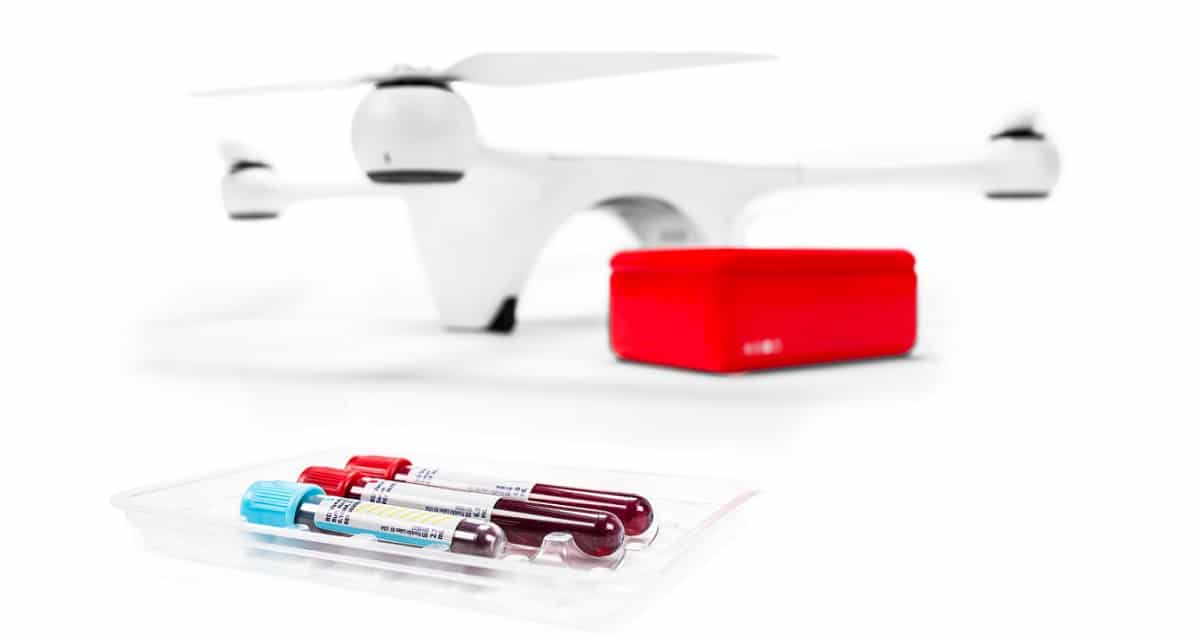 Matternet is quite a famous name in the field of drone delivery services as a drone shipping company. The company started its journey in 2011. This company works on offering end-to-end drone delivery solutions which aid in their proprietary Cloud Platform, M2 Drone, and Station.

Their commercial drone delivery services work in the sectors of eCommerce, healthcare, and logistics, where the service providers can avail the shipping method of Matternet.

Matternet is currently working with permission from the Swiss aviation authority. With this permission and authorization, this company conducts full logistic operations in various cities. The company works with drones that can easily transport payloads weighing 2 kilos and 4 liters across the length of 20 Kilometer.

The proprietary software platform of Matternet receives orders from the customer. Then it creates the drones package delivery routes for their drones which they monitor, command and control to operate the assets of the company.

With the growth of the drone delivery facility, the companies are currently enjoying the seamless delivery process. But the delivery club drone is yet to flourish more as there are many challenges still in the way, which are working as obstacles. However, the future of commercial drone delivery services is full of opportunities.

Where to Sell Handmade Items in 2022?