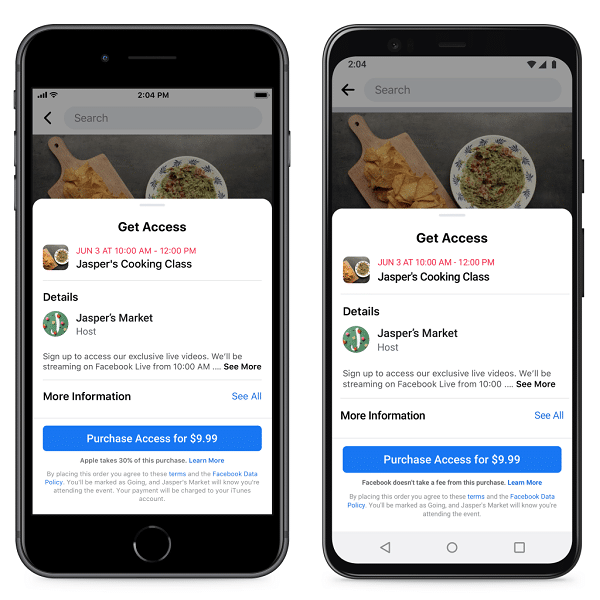 Facebook has added new paid events options for businesses and creators whereby one can generate income sitting at home amidst the ongoing coronavirus pandemic.

With the social distancing norms now becoming a part of normal routine life, businesses are radically transforming themselves into the online format. Different events and their services are going online to connect with end-user customers as well as reaching new ones.

This new option will be available initially in 20 countries and enable businesses and creators to charge directly on Facebook for access to their online events. As it is in the launch phase, Facebook is not taking any cut in the fee paid, as per its partner monetization policy but the catch is that the attendees will still need to pay a 30% cut to the App Store if they sign up on iOS

Facebook said “For transactions on the web, and on Android in countries where we have rolled out Facebook Pay, small businesses will keep 100% of the revenue they generate from paid online events. We asked Apple to reduce its 30% App Store tax or allow us to offer Facebook Pay so we could absorb all costs for businesses struggling during COVID-19. Unfortunately, they dismissed both our requests and SMBs will only be paid 70% of their hard-earned revenue.”

With Apple having a very rigid policy stance on in-app payment, it may be asking for trouble by coming under more scrutiny. This can be further related to the context that  Epic Games this week decided to go against the App store rules and implement direct payment options within its popular ‘Fortnite’ app. In retaliation, Apple was quick to remove the Fortnite from its  Store, citing the rule breach, but Epic is setting itself up to battle the tech giant in the court of law regarding payment rules.

The company’s troubles are not diminishing as it already has several antitrust investigations going on over its conduct around App Store payments and Facebook has also taken the heat on. Whether those actions eventually force a change at Apple is yet to be seen but as far as the rules of the game are concerned, for now, businesses will not be able to take 100% of the income generated by their events. Unless they direct all interested parties to sign up via the web (or Android) instead.

Facebook is not new to the paid events option as in past it has a subscription-based option for gaming streamers via its ‘Level Up ‘ program. Furthermore, in June,  it also began rolling out paid events within its existing Fan Subscriptions program for prominent creators.

However, it is for the first time that Facebook has made paid events such widely available. What effects will it have on money-making options and overall business growth is something which needs to be keenly observed in times to come.