In April 2021, Facebook had made a series of investments in new audio products such as clubhouse Live audio competitor as well as new support for podcasts. Today, the platform is officially coming out with the introduction of Live  Audio Rooms in the U.S. on iOS, starting with public figures and select Facebook Groups and the debut of an initial set of U.S. podcast partners.

The platform mentions that these Live Audio Rooms will be made available to any verified public figure or creator in the U.S. who is in good standing with Facebook and is using either a profile or the new Facebook Pages experience on iOS. For Facebook Groups, the feature is launching with “dozens of groups.

Both the products are anticipated to be available in weeks or months to come as more people, Groups and podcasts are being brought to be a part of it.

Just like any other audio apps, Facebook’s Live Audio Rooms offer a standard set of features.

The event’s hosts appear in rounded profile icons at the top of the screen, while the listeners appear in the bottom half of the screen, as smaller icons. The active speaker is indicated with a glowing ring. If verified, a check appears next to their name, as well. There are also options for enabling live captions, a “raise hand” tool to request to speak, and tools to share the room with others on Facebook, through things like News Feed or Group posts. However, there are a few things that Facebook does a little differently than others. For instance, hosts are able to invite people to join them as a speaker in advance of the session, or they can choose listeners during the stream to join them. In each session, there can be up to 50 speakers and there’s no limit on the number of listeners, Facebook says. During the session, users will be notified when friends or followers join the chat, too.

Moreover, while listening, users can “Like” or react to the content as it streams using the “Thumbs Up” button at the bottom of the screen which connects you to Facebook’s set of emoji reactions. There is an additional feature of “Stars” to show support to the public figure of the Live Audio Room. By sending Stars, the listener is bumped up to the “Front Row,” a special section that highlights the people who sent the Stars. This allows the event’s hosts to easily recognize their supporters and even give them a shout-out during the event if they choose. 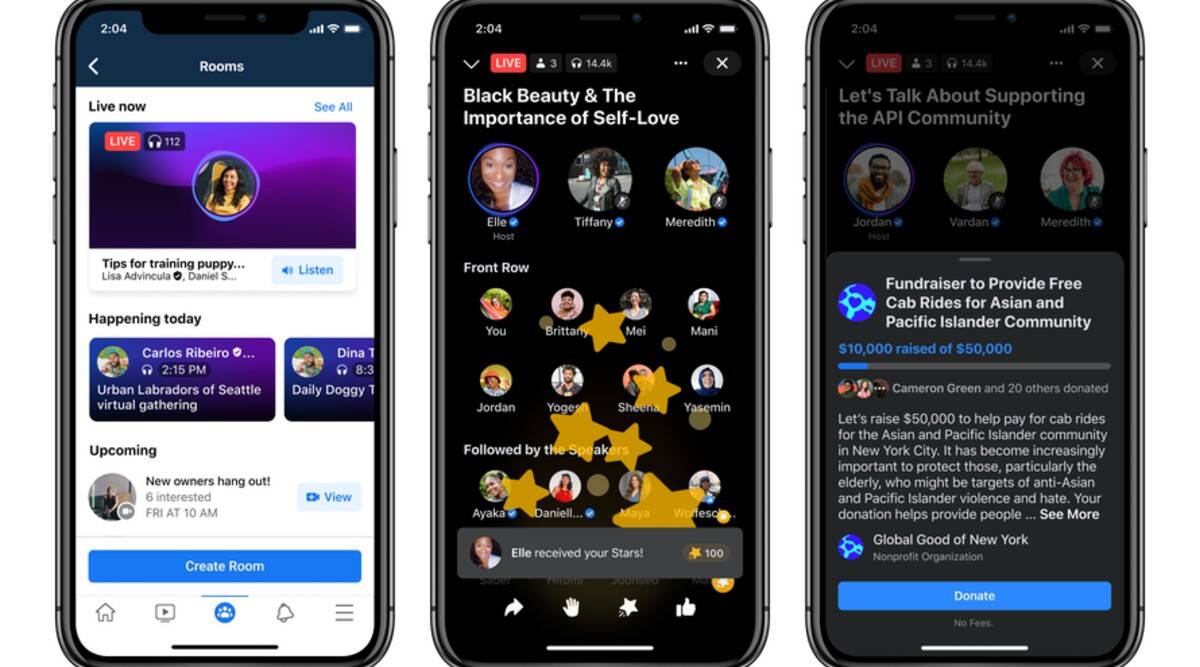 Another new feature allows hosts to select a nonprofit or fundraiser to support during their conversation, and listeners and speakers can directly donate. A progress bar will show how much has been raised during the show.

Facebook users are alerted to all the new Live Audio Rooms via the News Feed and Notifications and can sign up to be reminded when a room they’re interested in goes Live. They can be also be discovered in Facebook groups, if available in them.

The tests for this feature were quietly run by the company in Taiwan and internally with Facebook employees Those tests will continue. Facebook expects to expand its audio products globally in the months ahead.

Share
Facebook
Twitter
Linkedin
Previous articleAmazon continues to grow, holds the title of the largest online retailer along with coming Prime Day
Next articleDigital shoppers overwhelmed with a series of sale events on top of an on-going Amazon Prime Day